I liked the idea of being able to customise a case with your own photo’s yourself. I assumed because I have an iPod that there wouldn’t be a case to fit but I was surprised to see there were cases for a massive range of smart phones and iPod 4 and 5.

The site is really easy to use and navigate, with an option of choosing a pattern from the gallery or creating your own single photo or collage layout with your own images. As with any software, the more you zoom the fuzzier the image will become, so if you’re using photographs where the main subject is far away, I suggest using the busier collage for smaller images. There is also an option to pick a background colour so you can separate your images but I just chose to stack my pictures up. I’ve blurred this one image as The Bloke doesn’t want to be featured on my blog. 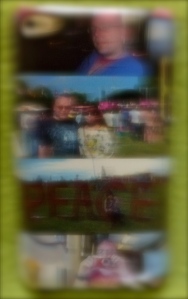 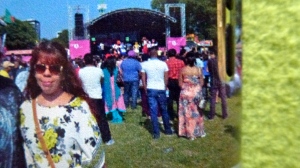 I’m pleased with the overall image quality of the printing, it’s clear, bright and includes fine details. These photographs were taken with a Panasonic Lumix with a Leica lens (a ‘point and shoot’ but a top quality one) so I would’ve been disappointed with a big drop in image quality. The image quality does deteriorate right at the very edges where the image has been wrapped around the case, so don’t use a photo where a loved one is right on the edge of the picture! There was a slight funky plastic smell to the case at first but it faded after about a week.

Over all I’m pretty pleased with my totally unique customised case. I also like the slightly matt feel so it’s not too slippy. I received this item from Mr Nutcase for review purposes but it would normally retail at £14.95.
____________________
Update:
I’ve had the case for 5 months now and I carefully take it off and swap it for a rubber one (with more grip) every 2-3 weeks when I’m on a night out. I strongly advise, especially with a thinner case like the iPod Touch one, that you leave it on permanently, as it’s cracked in three places and is now so brittle that if I squeezed it in my hand it would shatter. I have another hard shell case which this hasn’t happened with.