Before I met The Bloke, the thing that used to make me cringe about valentine’s day wasn’t being single (which was a great excuse to go out clubbing), it was that my Mam (with good intentions) would leave a little sickly sweet present on my bedside table for me to find the second I woke up. Nothing makes the heart melt more than a stealthy, gimmicky reminder of the fact you are still alone, again! 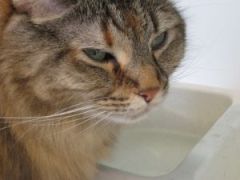 Now I’m partnered up with someone who, like me, hates the materialistic charade valentine’s day has become (or was it always like this to some extent?) but does want to do something nicer than completely ignoring the entire thing. I agree that you should be doing lovely, thoughtful little gestures for your loved one all year round, rather than some big shoe boating gesture on one day of the year. Trying to be crafty I asked The Bloke “Why not be considerate all year round and do something special and romantic on V day as well?” “Because everyone is doing it at the same time, probably literally. It’s a must, rather than a want.” Agreed! He laughed out loud at this though.

A few days before valentine’s we have our day. This year it’s a night out at our fave restaurant where we’ll either go dutch on the bill or go off who ever’s turn it is to spoil the other taking birthdays, cash etc into consideration.

No cards unless they are silly one’s.

We don’t have to declare our un-dying love in writing. We can convey our love how ever we want, wether that’s over a bottle of wine in the restaurant or over a can of unpronounceable Polish beer back at home.

I don’t have to dress in really uncomfortable ‘sexy’ underwear that’s impossible for either of us to undo and costs a fortune even though I’ll wear it twice a year tops.

We do however, want to make a real effort to scrub up well. Which he really does well, I mean he literally looses 10 years in 10 minutes, just by shaving his head and beard. Not fair!

He knows better than to buy me some pink, fluffy piece of cheap crap that even Barbie would avoid.

On the actual V day we do whatever we would have normally done on that particular day of the week. Because that’s every other couples day to celebrate it…or not.

Is it just me, or has referring to it as V day made it sound rude? That’s definitely more ‘us’ then.