I’ve heard of the health benefits* of seaweed but I’d never actually tried this unusual algae in my diet before, so I was excited and curious when The Cornish Seaweed Company sent me their edible products.

This is a brown seaweed rich in calcium and magnesium. It naturally has a crunchy texture and when cooked has a beefy flavour or a nutty flavour when used raw in salads. I decided to use this in a stir fry. I soaked the spaghetti for 30 mins in tepid water as instructed. I stir fried cherry tomatoes and mushrooms and pine nuts with a little oil in a frying pan then added the sea spaghetti, almost dry frying it as to not make it too greasy. I quickly stirred in some green pesto before serving.

I really enjoyed this quick and simple dish and I’m definitely going to cook it again. I only needed half the amount of spaghetti I expected as it doubled in size when soaked.

This mixture of dried seaweeds has the look and feel of confetti when dry. It has many herb like uses or it can be rehydrated and needed into dough – a little too advanced for me I’m afraid! I love the suggestion of adding it to mashed potato for some unique flavour and texture. I decided to add mine to a two egg omelette as I usually find them a little bland. I lightly covered the surface of the egg mixture with Sea Salad before pouring it into the pan. I’ve also started to adding this to my miso soup for lunch.

Another success! This was the best omelette I’ve ever had that wasn’t smothered in HP sauce, in fact I didn’t touch it. Instead I used a tiny pinch of the seaweed sea salt to season. 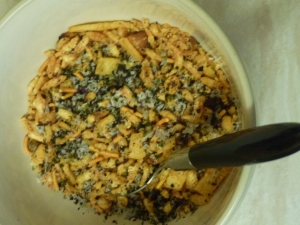 I’ve started using this instead of normal salt in everything apart from baking. The seaweed adds such a rich savoury flavour that I only need a small pinch or two ground between fingertips in each dish (a third of the salt I used to use). I bought a packet of Indian Chevda (similar to Bombay mix) but found it overly sweet so I added a few pinches of the seaweed salt which brought out all of the different flavours and totally transformed it.

I first tried to use this as suggested on the packet as a stock along with a teaspoon of vegetable bouillon. It tasty quite nice at first but half way through my drink I had to admit it tasted like I was drinking the sea! The other suggestions on the packet were roast, fry or boil. I persevered and soaked a strip in cold water until soft and slimy. So slimy, I wimped out and couldn’t bring myself to combine this with other ingredients to go into the oven. I decided to cut it into pieces and grill it to make crisps. As it was cooking it smelled similar to sausages, which was nice. After 6 minutes the pieces were crispy and tasted good but after chewing the same piece for ages, which just wouldn’t go away, I admitted defeat. I’m going to give the Kombu to someone else to tackle and keep on enjoying the other seaweeds myself.

So that slippery weird stuff which freaks you out when it brushes past your legs in the water actually tastes pretty good!

*Seaweed is rich in iodine which is essential if you eat a lot of soy products constantly. I’m not a nutritionist but every website I’ve visited (regarding the effects of soy on hormonal health) suggest a diet containing iodine to balance the effects of soy on the body. Seaweed is also known for it’s positive effects on neurological health, especially memory and concentration.