So Recently I’ve Been…

Creating coffee flavours. I’m not a huge fan of coffee on it’s own but I like the flavour as 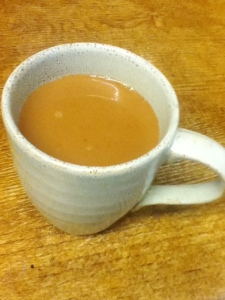 part of something else. This is Chrissie’s Special Mocha.

Drop of cold coconut milk to turn choccy into a paste

maple syrup to your taste.

Drinking Bulmer’s Zesty Blood Orange Cider. I had never heard of blood oranges the first time I tried one and I thought it was a normal one – until I opened it up clumsily and it appeared to actually be bleeding! Not traumatic at all. Anyway, this cider has a grown up taste unlike sickly sweet alcopops it’s a lot more balanced and palatable, rather like a sweet rose wine.

Re-watching Third Rock From The Sun as me and the bloke loved it the first time around and now we can laugh until no sound comes out all over again but sitting next to each other. If you don’t know it’s about a group of 4 aliens that have taken the guise of a human family to study our strange little species but they find us a lot more complex and challenging than they first thought, with brilliantly funny consequences. John Lithgow’s performance is just genius! With an early turn from Joseph Gordon-Levitt (Inception, 500 Days of Summer) as teenager Tommy, Kristen Johnston (Sex and The City as the girl who was so bored she could die literally) as the unstoppable Sally and French Stewart (Mom TV series, The Penguins of Madagascar) on wonderfully weird form.

Getting MRI scanned and getting many surprise birthday flowers! The bloke arranged a surprise delivery of them and sent a bouquet to my Mum as well for her birthday which is aday before mine – aww! 12 days later I had to go for my second full brain and spine scan where I had to keep perfectly still or they have to do that section all over again. My nerves flinch quite severely and rather randomly, plus with my attention span I find the monotony of doing nothing and waiting in a tube with a frame over my face to be really frustrating. Plus, this should have been done 6 month ago. I met The bloke at the hospital hiding behind a column!? Then I realised he’d turned up with a giant bunches of flowers! Turns out he and his Dad had gone rather flower crazy for me when doing some shopping earlier! Discovering cool geek stuff Modern live action Avengers get an original comic book make-under by artists Kate Willaert.

I’ve also discovered the original tittles of popular films when they were in book format (I knew the Philip K Dick ones obviously being a sci-fi fan), some were much better, others like the original The Social Network tittle where pretty bobbins!

Watching this trailer for Mad Max: Fury Road which looks like the film is one hell of a ride! Has anyone seen it yet?

In pain and determined to cheer myself up. I sighed and relaxed and my back just sort

of collapsed – backward! Basically I’ve been walking like an old lady penguin for several days. Who knew a kettle could feel so heavy and that you use muscles in your back when lifting it? I’m starting to realise you use the muscles in your lower back for just about everything! All of this rest means I’m getting very good at 8 Ball Pool though. Who wants a game? After three days of being cooped up I got dressed and dragged myself out to the local deli and shops to get Mediterranean style lunch, something sweet and fizzy and a magazine to read as my eyes were starting to go square after all that online pool playing. 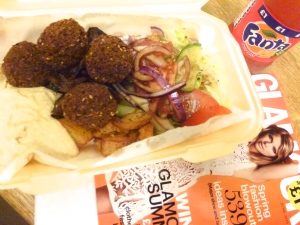 Have you come across any of these things or is there anything similar that you recommend?

4 responses to “So Recently I’ve Been…”