My 6 Retro Cartoon Tee’s and the Story Behind Them

I like how this has a faded and imperfect union jack in the background which makes it look a bit punk. I’m proud to say Danger Mouse is Mancunian, made by Cosgrove Hall in Chortlon-Cum-Hardy in Manchester! Ironic I should find it in Chorlton, ha.

Not remotely cute and rather creepy – I love it! It almost looks like it’s been painted on and has a flattering girly cut, surprisingly! Not available any more unfortunately. 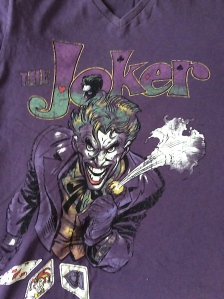 This was my favourite bonkers show as a kid in the 80’s, so much cooler than Sesame Street (also made by Jim Henson’s Creature Shop), unless you count Cookie Monster and that green grumpy dude in the bin and Animal the drummer… I love the fake vintage fade on this also.

I ❤ Marvel Superheroes from Primark

Yes it’s really bright but it’s also girly and funny. It has the most flattering girly cut to it.

Another Cosgrove Hall production featuring a veggie vampire duck voiced by the wonderfully witty David Jason. Ooh I wonder if Truffle Shuffle have a Trap Door one? As mentioned in a previous post, I dyed this ‘Antique Grey’ (with Dylon) to make the fading more apparent and to dull the really bright colours.

Moomin from Tesco (*whispers* part of a pyjama set, ssh…)

Finnish woman Tove Jannsen created these cute hippo like creatures and their world back in the 40’s. The Blokes face was a picture when I turned up wearing this. He new she was a Moomin though! This is still available in shops now and comes with cotton sleep shorts. The shorts feel like they are two sizes smaller than the top, unfortunately for my big bum!

Which are your faves? I can’t choose! Do you have any awesome geek/cartoon tees?