I’ll start with some good news first. I won my appeal against the Department for Work and Pensions – yay! I am so utterly relieved!

Previously the DWP had ‘assessed’ me in the most pointless way – it was pointless because they literally awarded me no points, meaning that I was supposedly fit for work. I appealed with endless evidence from my GP and Neurologist who wrote me a letter especially for that purpose. I wrote a thorough list of notes on a copy of their report (which I had to request myself) addressing where they had taken things out of context and at one point completely omitted that I’d failed their memory test! Again the DWP utterly ignored all of this saying their original decision was correct and that I was fit for work.

I took them to tribunal where I faced two lovely and very understanding people with no government agenda who actually wanted to listen and understand me before judging my abilities. So with the evidence from my GP and Neurologist and the DWP report that I’d enthusiastically corrected in my best angry scrawl (blush) and my verbal testament and  written testament and my answers to their gentle and relevant questions, they concluded that my Neurology didn’t exactly fit in with the DWP’s points system but regardless of that fact, my fatigue, memory and spacial awareness problems rendered it too stressful for me to struggle with holding down a job and it would be at a detriment to my mental health – having previously suffered from severe depression after a never ending cycle of starting jobs, doing my absolute best, failing to cope and then being ‘let go’ from the companies.

Phew and Thank You!

There is absolutely no way I could have done this without the help of my family and friends and there support, advice and constant reminders to follow things up! Anyone who has managed to do this on their own is an absolute hero in my opinion. Online communities like Twitter and the Dyspraxia, MS and Sensory Processing Disorder Facebook pages and their members have been a massive source of empathy and knowledge also.

So what the hell is up with me exactly? 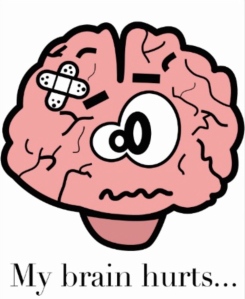 I have an autoimmune disease which means my body’s immune system is attacking healthy cells thinking they are invading and so destroying them. Unfortunately my immune system is actually attacking my brain and the myelin sheath that protects my nerves in my spine which is called demyelination. Unfortunately this is a  degenerative condition of which there is no cure for – some heavy shit I know! Fortunately there are drugs and exercises (mental and physical) to manage the symptoms (with varying degrees of success). My symptoms are so similar to MS my Neurologist has not yet ruled it out.

Basically the signals from my nerves are either very weak, don’t get sent or are slow to be understood by my brain and/or body. For instance my brain could ask my body to lift my foot up when going upstairs and my body’s response is either slightly late or my foot doesn’t lift up quite enough – oops! On the reverse side of that, I could have put a little bit of food in my mouth that is far too hot but because this signal from my body has taken a while to reach my brain I’ve already shovelled another spoonful in my mouth – ouch! I can see how dodgy nerve/brain signals can also effect memory and attention but why I get fatigue though I still don’t understand. I’ve been told ‘It’s just part of it.” It does take me a lot more energy to do things properly and to keep my thoughts straight than the average person but fatigue is a lot different than just feeling tired. It’s like the debilitating exhaustion of being really really hungover.

And The Other Conditions…

Along with that it’s clear I’ve had Dypraxia all of my life and to me personally I find that 80% of the demyelination symptoms are very similar but to a higher, even more unpredictable degree. Both the demyelination and Dyspraxia cause major sensory issues so I can also empathise with people who  have Sensory Processing Disorder. Because all of my different symptoms overlap so much I tend not to bother explaining that I have SPD because that is just a range of symptoms from the other two conditions I assume and not something that is separate (like it is for a lot of people).

I have no clue if anyone is a) reading this b) remotely interested. It’s here if anyone wants to use it as a resource for future reference or wants to understand the things I’ve mentioned a little better. If you have any questions just ask and I’ll do my best to answer them.