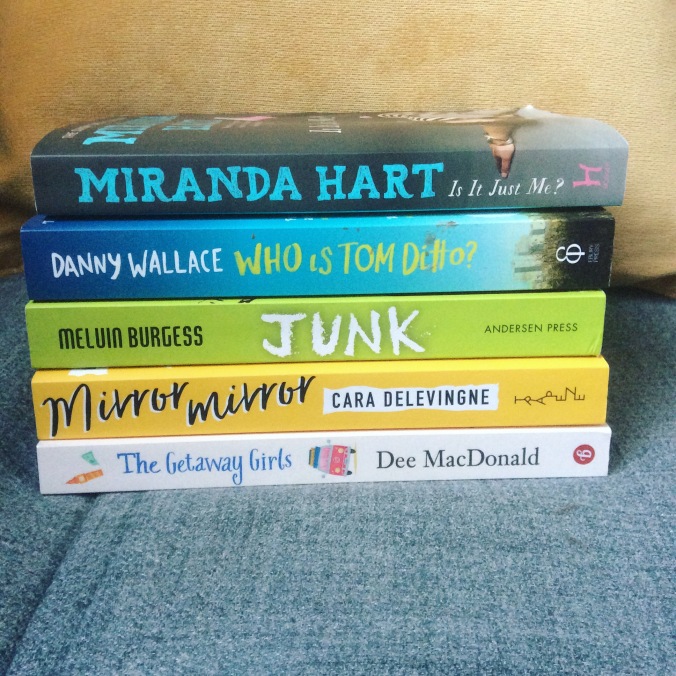 Two funny uplifting books, two modern mysteries and a down-to-earth story with people who dangerously have their head in the clouds. I thought it was time I gave fantasy and sci-fi a rest for a while.

Is It Just Me by Miranda Heart

Similar over the top but very relatable scenarios to her show. This time she’s explaining how she experiences things such as fashion, Dr’s, technology and dating to her younger – rather naive but hopeful – self. Jolly good fun, if a tad awks!

Who Is Tom Ditto by Danny Wallace

Toms girlfriend has left a note to say she has left but not actually left him. Confused? So is he. The more clues he tracks down as to her whereabouts, the more he learns about his girlfriend and himself. He realises maybe he didn’t know as much about either as he first thought and why is there a random girl following him?

I read this when I was 14 and it was a bit of a reality check compared to Sweet Valley High and Point Horror books! It’s about a love affair between two teenagers, heroin and the quirky group of people they fall in with. It’s about pushing boundaries because you feel you should but not caring where they should end.

Red and Naomi are in a band together until Naomi suddenly disappears. As Red follows the twists and turns of events she realises that it’s not just their friendship at stake but their lives.

Connie has freedom to do what she wants for the first time in decades. She meets glamorous Gill and downtrodden Maggie and they decide it’s time for a change. A tour of France and Italy in a luxury camper van to be exact. They have funny shared experiences but each still have their own story going on including a secret that catches up with them.

Have you read or would like to read any of these? Let me know – no spoilers though!