To play a teenage me I’d pick Sarah Jeffery who plays Thandie Newtons daughter in the series Rougue and Jennifer Lopez daughter in Shades of Blue. She looks really quite similar to me when I was about 13 and I think she is a fantastic actress. 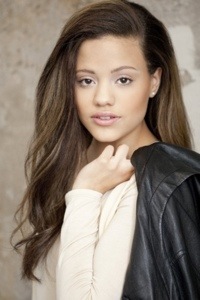 As for who’d play me now, I’d say Michaela Conlin who plays Angela in Bones. She has the same build, faceshape, features and skin tone as me. I also love her as feisty, wise and empathetic Angie.

The actress who I’d really love to play me – given a little bit of artistic licence – would have to be Michelle Rodriguez. She plays all of the tough-chick-with-a-heart characters that I love. She is amazing in the film Girl Fight.

The green contact lenses would be out in force at this point!

So who would you pick to play you?