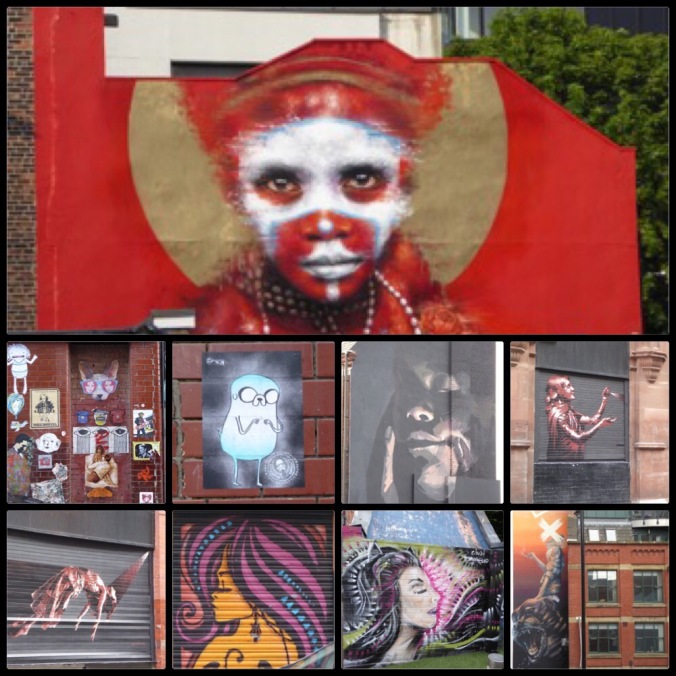 The Cities of Hope project has been going on in Manchester for 9 days in the Northern Quarter, where renowned street artists from around the world came to Manchester to create art focusing on social justice including homelessness, mental health and equal rights. 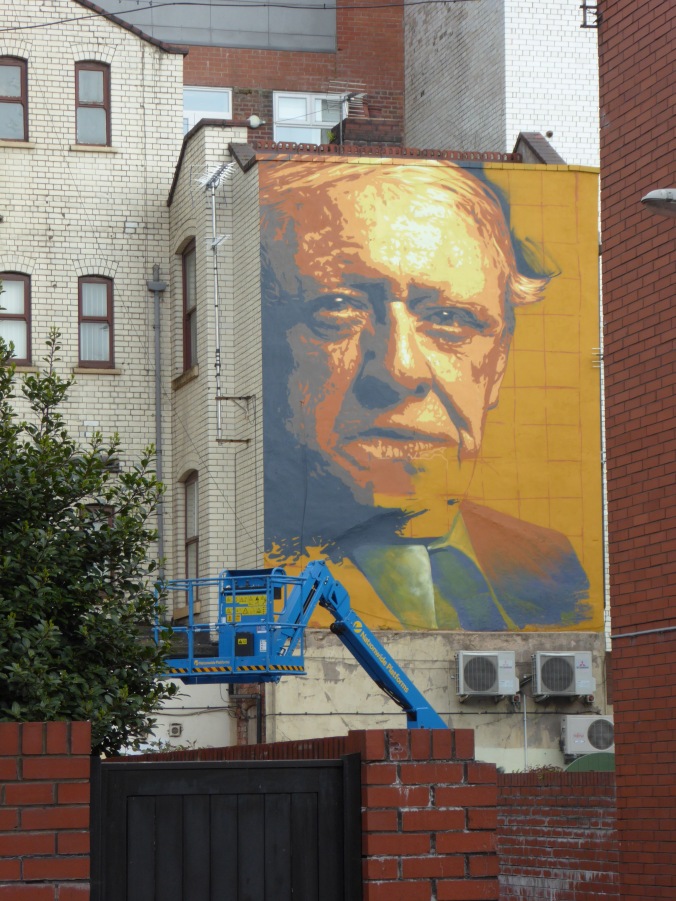 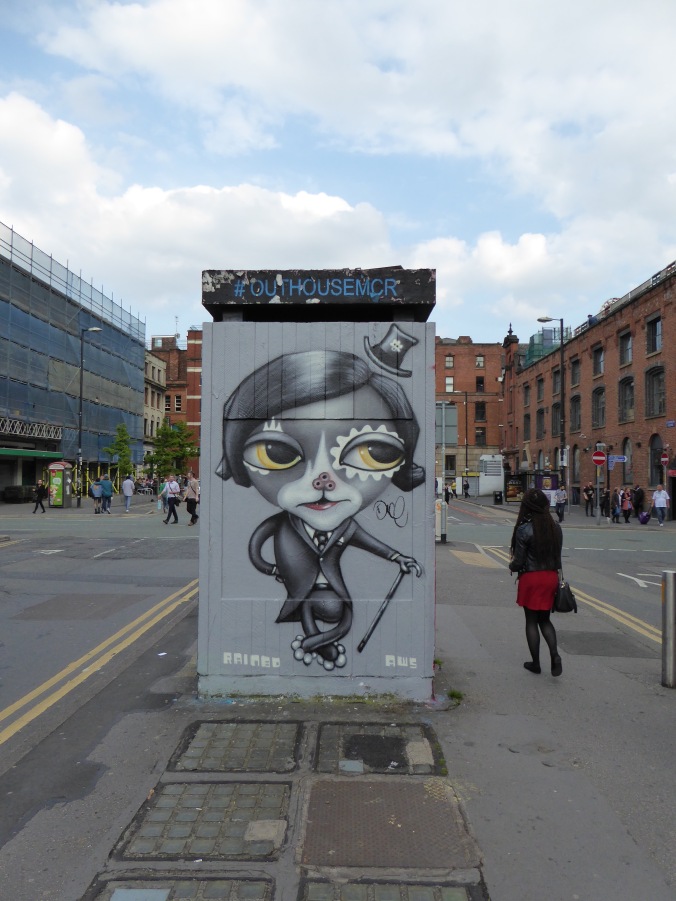 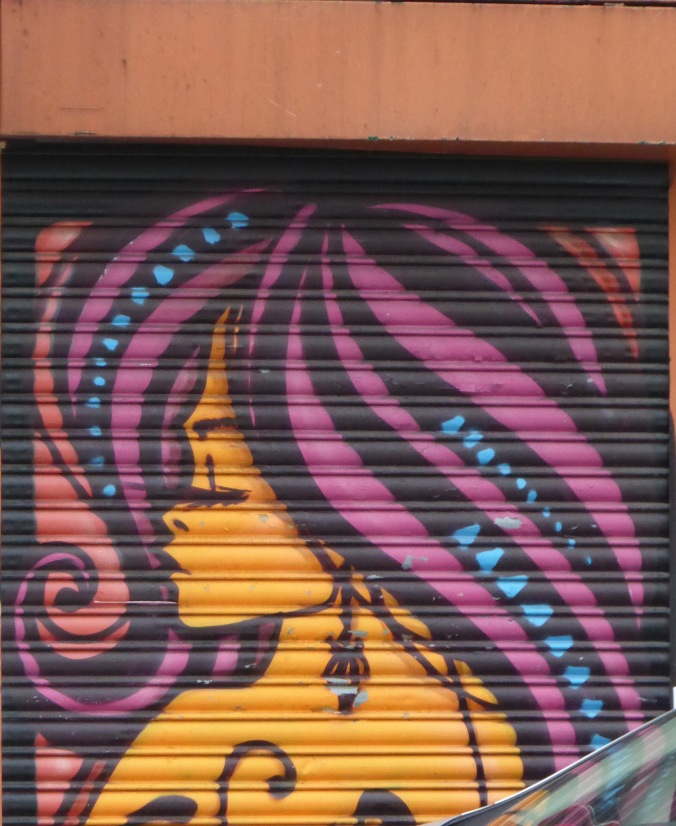 Don’t know if anyone remembers me posting this piece last year but I went to check if it was still in the wall and found a little dude chilling on the stairs! 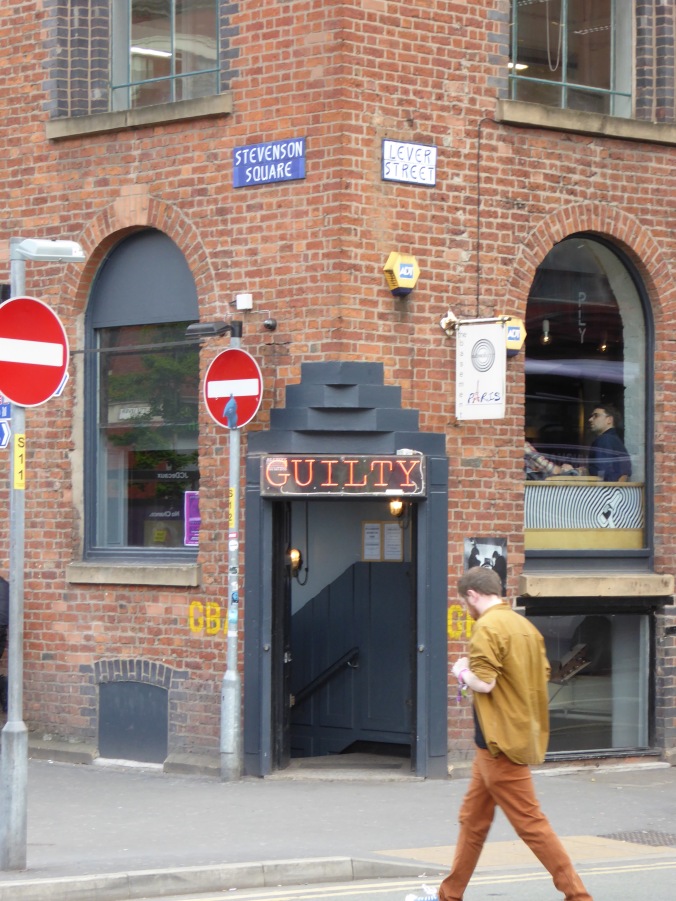 Look out for more street art and general Manchester street shots in future. I intend to do one a month if poss.

A women who wants the right to equal pay, the right have kids and a career or just the career, the right to sleep with who she wants, the right for her opinion on important issues to be heard, and who wishes the same for other women, is a feminist.

However, you can take proving you are strong and independent a little too far.

I was a fairly tough chick who never used to show her emotions – well not the vulnerable ones any way. “Don’t hug me! If you hug me I might cry.” “That’s ok.” “Piss off!”

I would struggle for ages with something fiddly before begrudgingly asking for help.

I was rubbish at accepting advice, especially from a man because that would mean I was admitting I was weaker.

I was an idiot! Thankfully, my attitude has matured a lot since then.

It’s ok to let your guard down…

Like a million women out there, I go all giggly when a handsome bloke catches me off guard with a genuine compliment. I appreciate men offering me their hand when I’m walking down a slippery slope. When I’m cold and a dude puts his jacket around my shoulders I’m really happy. Not just because of the warmth but because of the gesture. When I feel poorly or blue a big bear hug from a lovely bloke cheers me up because I feel cared for.

I’m not remotely petite and girly but I love having a big bloke make me feel like I am.

I know I can look after myself most of the time but when walking home at night or when there’s a spider in the bath I want to be protect by a manly man.

When I’m doubting myself or having an emotional wobble I want to be held and told by someone bigger than me that it’ll be ok because they are there.

I appreciate good old fashioned chivalry and for a man to make me feel safe and special and to spoil me sometimes.

When we want that kind of male support it doesn’t make us weak or hypocritical. It doesn’t mean we are all just lost little girls that NEED men to control and rescue us. It’s simply that, it feels fantastic when you can let yourself be vulnerable enough with a man to admit you want help or reassurance and to accept it. Blokey bear hugs are the best!

With the Everyday Sexism project filled with women’s stories and the #YesAllWomen tag trending for so long on Twitter (both of which are incredibly important to raise awareness and an amazing way for people to share experiences of course), it’s easy to forget that men also suffer from being sexually harassed.

A large part of this would appear to be in the work place. The Equal opportunity commission found over 16% of sexual harassment complaints were from men. That was back in 2009 but I get the distinct feeling that has risen since. The fact that I searched on Google for 45 minutes and this was the only hard statistic I found, despite many pages on the subject, shows there needs to be more awareness of this.

I know there are female bosses as well as male bosses out there that are on some sort of power trip and use whatever is at their disposal to intimidate and control the opposite sex. I also understand there might also be women out there feeling resentment for how they have been previously treated by men but ‘turning the tables’ does not equal gender equality or make it ‘even’.

1. Long suffering meek house husband who gets put upon by his feisty wife who’s out having fun with the girls constantly.

2. Just plain stupid and therefore needing his wife to take charge of the mess he’s made.

3. A totally stereotypical bloke called ‘Dave’ who’s interests only stretch as far as football, gaming, food and birds, who’s girlfriend delights in embarrassing, while intellectually lording it over him in public.

I don’t know if these ads are written by particularly bitter or just plain snobby types of women or whether it’s male writers awful attempts at connecting with female audiences ‘on their level’, which it isn’t, at least not for the women I know.

So called ‘reverse sexism’ is still sexism after all.

We aren’t just talking about women to men sexism and sexual harassment here. It also happens in ways that you wouldn’t necessarily assume.

Examples of sexual harassment my male friends have experienced:

Lee* was having a drink in a beer garden one Sunday with 2 other male friends. All three were tall, athletically built and had shaved heads, they were often mistaken for brothers. The weather was warm and every table was packed with people. A young obviously gay man made a flirty comment to Lee and winked at him as he passed by. Lee was pretty non-plussed, along with his mates and they carried on chatting.

Over the course of an hour, the boy had passed by repeatedly making comments every time, which were getting a little cruder and louder each time. Then he and his 2 mates grabbed the table next to Lee and the boy started telling his mates, loudly and with hardly any subtlety, what he’d like to do to “a certain someone near by’.

Several bar staff had over heard Lee getting harassed and Lee and his mates repeatedly asking the boy to shut up. Non of the bar staff said or did anything though. Non of the other drinkers in the fairly small beer garden had said a thing either, even though several were tutting and shaking their heads. Lee was too shocked and embarrassed to complain to the manager and his mates didn’t feel comfortable getting into a fight or getting done for assault!

When Lee saw the boy deliberately start to make a detour right around the table to where he was sitting, he’d had enough. He stood up and confronted him. All eyes were suddenly on them. The boy again tried to suggest that Lee obviously fancied him and he “knew it was just a matter of time”.

Lee squared up to the boy and looked at him with total disdain and slight amusement before loudly saying “That’s it! Everyone here is bored with listening to you embarrass yourself. Fuck off and take your pathetic little power trip with you.”

The boys cheeks flushed a little and he looked around at the other punters, most of whom were glaring at him. A few were murmuring “well said”. The boy looked at his mates who didn’t look quite as amused as before. Then he declared that the pub was “shit anyway” and stormed off, followed by his mates.

Lee who is a confident out going kind of man, told me after the incident that he realised his hands were shaking and when his mate asked if he was ok, he had to take a moment to compose himself before answering.

Me and my mate *Danny were in a gay club in Manchester’s gay village, it was Danny’s first ever night out being openly gay and it was his 21st birthday. I noticed that a man considerably older than him was acting really pushy and Danny obviously looked really apprehensive and then totally uncomfortable. I had a word with the man but he just brushed it off as a misunderstanding.

Only a few minutes later he was back and holding onto Danny’s arms as he was trying to pull away. I told one of the door men what was happening and he immediately went over to them. By now Danny was yelling at the man to let him go and looking really freaked out. The door man grabbed hold of the man and dragged him out.

Danny told me almost in tears that the man had said “unless you make me happy, I’ll follow you around until you give in”. In a way, what surprised me wasn’t how the man acted but the fact that Danny was so unprepared for it and didn’t have a clue how to deal with it. Then I realised that as a male he’d never had to get used to dealing with casual sexual harassment or creeps in clubs before.

A male couple who’d seen the man get dragged out came over and asked Danny what had happened and was he Ok. They invited us over to join their table of friends who were all so lovely and understanding.

WE MIGHT ACTUALLY EXPECT SEXUAL HARASSMENT BUT WE SHOULD NEVER JUST ACCEPT IT.

Everyone should stand up for themselves but just as importantly WE SHOULD ALL STAND UP FOR EACH OTHER.

*I’ve changed the names of my friends as they wanted to remain anonymous.

I’d be the one bottom-right I reckon :0)

Let’s show respect, empathy and support for all of our sisters around the world, not just today but everyday! 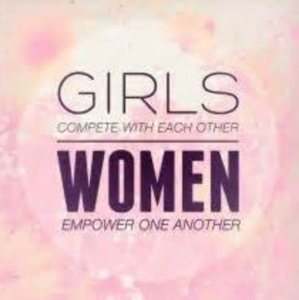 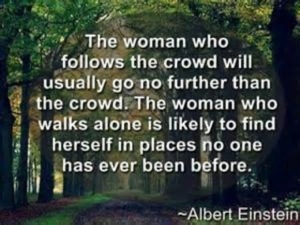