How many times have you looked at a menu in a restaurant and been totally spoiled for choice? How many times have you said “I’ll have to try those next time” only for the menu to have changed by the time you go back? Well, The Bloke had the wonderful idea of condensing at least two months worth of eating out into three consecutive nights!

‘Black Pudding’ with mustard mayo. I’ve never remotely fancied the idea of black pudding but as this was veggie I gave it a try and it was lovely – especially with the amazing mayo. The Bloke told me that yes, they really did get the flavour and texture spot on. The only criticism I had was that our tasters arrived separately with quite a wait before the second one arrived.

Beetroot and whipped goat cheese salad with cucumber jelly and walnut vinaigrette. This was sweet and luxurious but also fresh and light. All three ingredients complimented each other perfectly. I just wish there were more of it!

Chestnut mushroom, roasted pumpkin and chestnut gnochi with pumpkin sauce. This is wonderful comfort food for a cold Autumn evening. I found the three main ingredients had very similar earthy flavours so I was grateful for the vegetables surrounding the gnochi and wished there were a little more.

Lancashire cheese and basil sausages with confit garlic mash, beer gravy and tomato chutney. Sausage and mash can be done so well or messed up so easily. This was the best sausages and mash I have ever eaten in my entire life! The sausages were tasty and moist, the mash was creamy and fluffy but still had some body to it. The gravy had a rich BBQ style to it and the tomato puree had a beautiful sweet tang.

I ordered olives and The Bloke ordered tomato humus with pita bread. They obviously worked well with each and even though The Bloke wasn’t sceptical about the flavoured humus at first, he actually really enjoyed it. I really liked the home made texture which was thick but not grainy.

Pumpkin and blue cheese pie with winter slaw.. This little slice of pie was so creamy, savoury and indulgent it put a very big smile on my face. This really has taught me that I’m a massive fan of blue cheese, which before this visit I never thought I would ever say! The slaw was a creamy but tangy addition which I appreciated.

Fennel and potato mandra curry with lemon and sultana pilaf and carrot & cumin salad. I’ve eaten many times on the curry mile, I’ve eaten in many Thai and pan Asian restaurants including Chophraya so I know what a brilliant curry tastes like. This was one of them. There was no over ridding flavour of any one ingredient. All of the different flavours were apparent, yet they blended together perfectly.

Pecorino and rocket salad. This actually came with the half sun dried tomatoes which were marinaded in something I couldn’t place and they weren’t mentioned on the menu so that was a nice surprise! 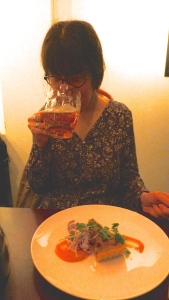